One of the areas I'm particularly excited about exploring on this site is a deeper dive into causes closest to the royals' hearts and the plethora of inspiring projects they champion and are actively involved in. Tonight, I'm delighted to share an interview with a fellow blogger, Heaven, author of Princess Marie's Closet, who kindly took the time to share insight and background on Princess Marie's participation in a Danish cookbook Food with Respect in support of her patronage DanChruchAid. Heaven also interviewed the cookbook's author Selina Juul and discussed her organisation Stop Wasting Food - Denmark’s largest non-profit movement against food waste. Additionally, Heaven touched on the origins and inspiration behind her blog, revealing how the royal inspired her personally. 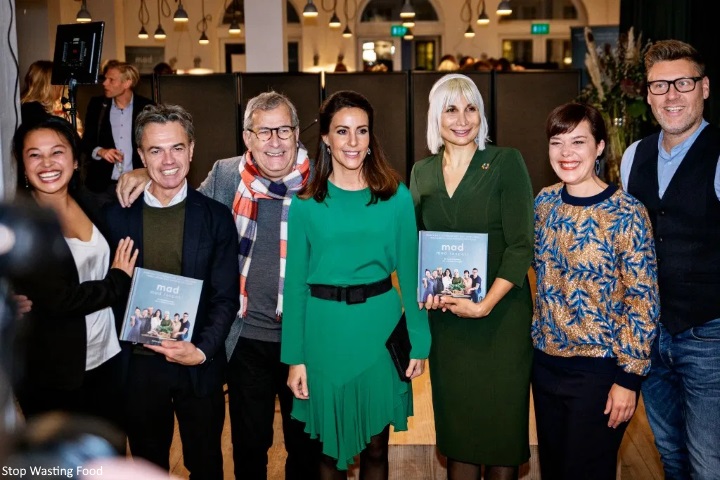 Heaven, thank you so much for kindly agreeing to discuss Princess Marie and her cookbook collaboration with Selina Juul in support of DanChurchAid. Could you tell us about the background of Food with Respect and Marie's involvement?

Princess Marie publicly got involved in the fight against food waste in 2016 and she has been working with the Stop Wasting Food movement - which Selina Juul founded in 2008 - since then. I was lucky enough to be able to interview Selina Juul about Princess Marie’s involvement in the process and she said: "Numbers from the Ministry of Environment and Food of Denmark show that the biggest food wasters are actually families with children because they have a very hard time to stop wasting food. They have no time because they are busy. So the Princess and I decided, almost 3 years ago, to get this book started because this book should be helping families to stop wasting food in a very tangible way." She also said she and Princess Marie "took a lot of time to pick the right chefs because we really wanted to have some people who are really into the Stop Wasting Food movement and not only because they are celebrities or want to be in a book with the Princess. They have to be there for the cause. That is why we picked these five people who are amazing and most of them are ambassadors for the Stop Wasting Food movement, so it was easy to get them on board."

Prince Joachim, Princess Marie and Selina Juul at a charity dinner in support of the organisation. 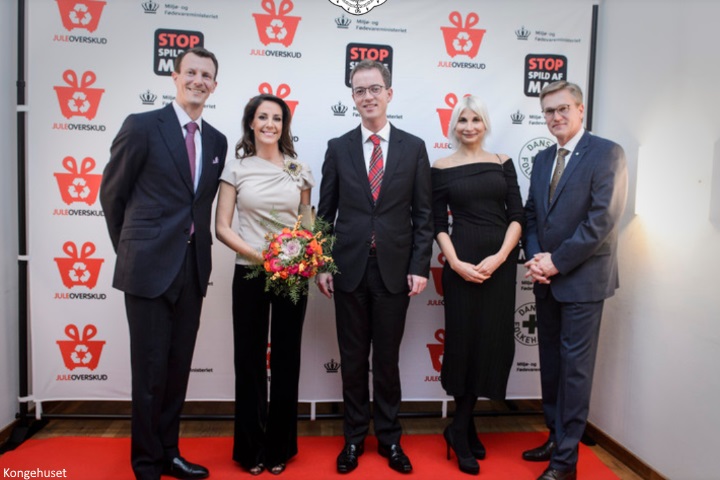 DanChurchAid is a lifeline for those most in need. I was impressed to read they helped 3.6 million people through humanitarian and development activities in 29 countries during 2016. They are striving to help those most vulnerable to lead a life with dignity. Would you say their ethos is very much in step with Princess Marie's charitable efforts? As their patron, she seems incredibly determined to go the extra mile and assist in fundraising.

DanChurchAid was one of Princess Marie’s first patronages and she has been involved in a lot of their projects and campaigns. She also did several humanitarian trips with them - the last one being in March 2020 in Uganda - so it’s no surprise that she chose them to benefit from the cookbook. Like the Stop Wasting Food movement said in their latest press release, the book helps "reduce food waste in Denmark and at the same time helps to provide the world's poorest with food on the table". In a recent interview, Princess Marie said that she couldn’t choose her patronages on her own since there are a lot of factors at play when choosing charities to work with but that she was lucky to have been able to get involved with all the causes she absolutely wanted to work with or to defend. In that interview, she said that she prefers having fewer patronages but to really invest time in them as she works with great people. So yes, I think DanChurchAid is a perfect example of Princess Marie’s charitable efforts and how involved she is with them, even behind-the-scenes. The care she has for each of her patronages shows in her work with them. I think she wants to help as much as she can and that’s admirable.

Marie visiting Myanmar in her role as patron of DanChurchAid, which strives to support those most vulnerable. 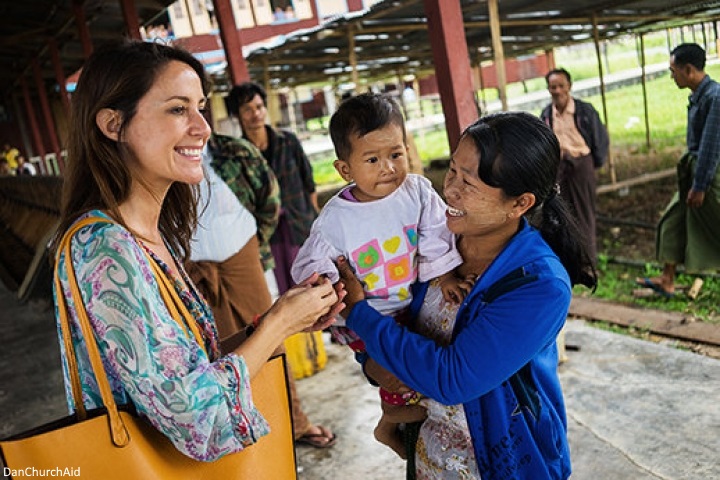 During an exclusive interview you conducted with author Selina Juul she revealed more about Marie: "We are so fortunate to collaborate with the Princess because the Princess is a very kind person and really has a heart at the right place. The Princess is really all-in for the cause." Which part of your discussion with Selina did you find the most insightful?

Since the beginning of Princess Marie’s involvement in the fight against food waste in 2016, I have been able to learn so much about food waste in itself, beyond Princess Marie’s involvement, through Selina Juul who is an amazing woman. I researched food waste a lot to be able to write thoroughly detailed posts - I even watched Selina’s TED talks - and that has influenced my own habits at home which is something I owe to Selina. She’s so passionate about this cause and it showed in the interview. Our discussion was very insightful as a whole but learning about the specific numbers of food waste is what I remember the most. We all vaguely know that food waste is bad and that we should all change our habits at home a little bit but it’s not always high on our list of priorities because we don’t have the time to really pay attention. Hearing the specific numbers and how it also relates to climate change was really an eye-opener for me. I had already changed some of my habits at home before that but it really struck me during the interview how bad it is now and how few people actually know about food waste. I remember telling Selina during our discussion that those numbers were shocking when you think of all the people who can’t afford food or who don’t have our privilege of being able to choose our food and put down a vegetable because it looks ‘ugly’ and buy one that looks ‘normal’. That is really the part of the interview that I keep in mind all the time and that I even talked about with family and friends because I don’t think we really realize how bad it actually is.

Princess Marie with Selina Juul at the opening of Too Good to Go's new store focusing on reducing food waste together. 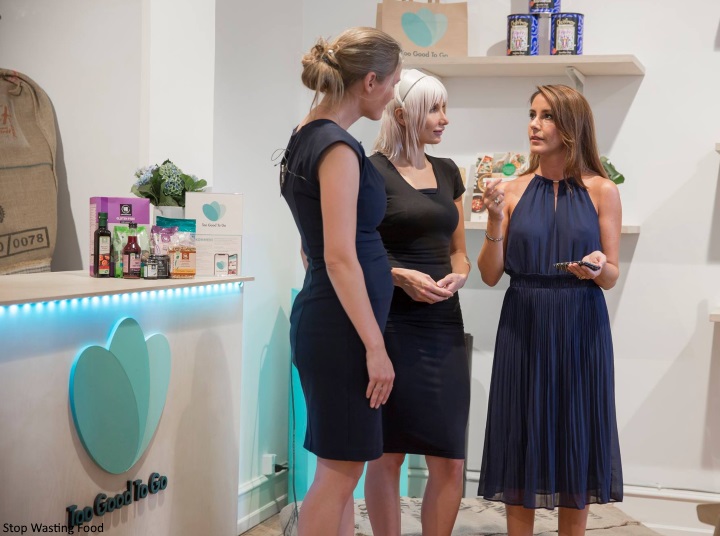 Can you tell us more about the success of the cookbook; how much it's raised?

The cookbook came out in November 2019 and the Stop Wasting Food movement recently announced that it had raised DKK 36,000 (€4,835/$5,514) for DanChurchAid which is an impressive amount. The cookbook also got great reviews in Denmark and won in the Family category at the 2020 Gourmand World Cookbook Awards! In the press release, Brigitte Qvist-Sørensen, the Secretary-General of DanChurchAid, said that "right now, more than 800 million people worldwide are starving – and that requires action so that we can save lives", which I think shows how important the fight against food waste is. 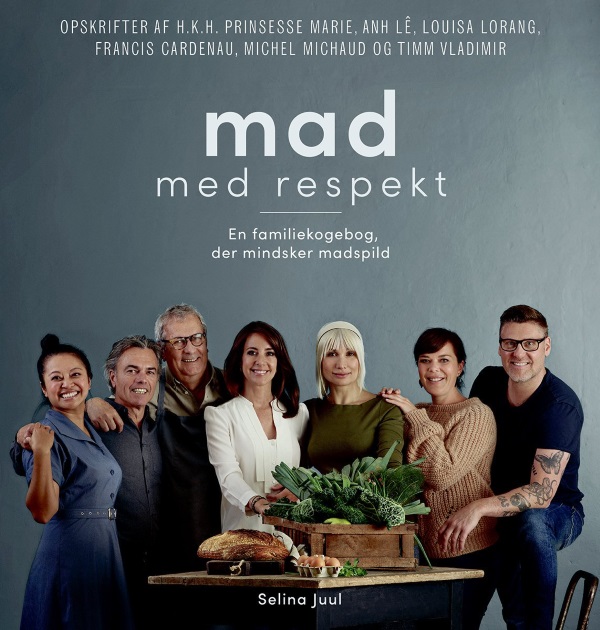 Where can we purchase Food with Respect? Is it available in English?

For now, Food with Respect only has a Danish version that is available in Denmark and online. There were plans for an English and a French version of the book but those plans have been put on hold because of the COVID-19 situation. There were also plans to create educational materials based on the books that would have been included in the Danish schools' curriculum on food waste but those plans have also been put on hold because of COVID-19.

Finally, Heaven, we know each other from royal Twitter where you have earned the reputation as an eagle-eyed sleuth when it comes to fashion ID's. I've been amazed by your discerning fashion eye (as someone who struggles to differentiate Gianvito Rossi from a pair of LK Bennett shoes :)). When it came to covering one royal from all the various families, what inspired you to choose Marie?

First of all, thank you for your kind words, I really appreciate them and you know how much I admire your work as well. I’ve been asked that question a lot in the past few years and I don’t think I’ve ever told the full story! I had been trying to identify royal fashion for two years before I started my own blog about Princess Marie in 2016. I had always been interested in her and at the time it was mostly because she was not getting as much coverage as other royals so I was curious and started learning more. Princess Marie’s causes were causes I was also passionate about so she quickly became my favorite. In addition to her work, she also has a fashion style that is quite close to mine so I was also drawn to that.

At the beginning of August 2016, I created the blog but I was still unsure about it and didn’t start writing right away. Long story short, it’s during that month that she attended Copenhagen Pride and as you may know, I’m bisexual, but no one knew at the time and I was in a really difficult place so to see my favorite royal at Pride was huge to me. I didn’t write about that specific event but she had another event the next day and that was my first post. It was the push I needed to fully commit to this because no one really talked about her being the first Danish royal to attend Pride and I wanted to try and make sure that her future events and projects would be talked about by at least one person. That event is a big part of my blogger story and one I keep very close to my heart, and Princess Marie - through that event and the interview she did with the LGBTQ+ magazine Out & About in 2017 - unknowingly played a part in my coming out story, if I can call it that. I never imagined I would get this far with the blog or get as many opportunities as I did but I’m very happy about it and very happy that more and more people are taking interest in Princess Marie's work! 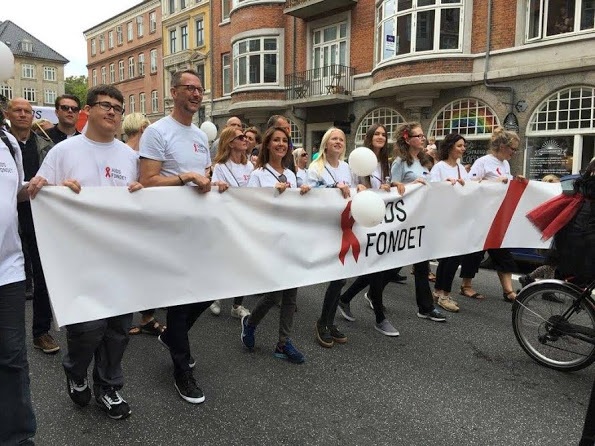 Through all of Princess Marie's efforts - the charities she works with, the countries she travels to and the people she meets - I doubt she'll find a finer example of the positive influence her role has had than in Heaven's story. I am so pleased Marie inspired Heaven (and possibly many others) by becoming the first Danish royal to attend Pride in 2016. A royal role is truly unique and the opportunity to inspire and advocate should never be wasted or taken for granted. I said to Heaven earlier, I sincerely hope she has the opportunity to meet Marie in the future. I want to thank Heaven for providing us with so much insightful information and for sharing her own personal story. I cannot recommend Princess Marie's Closet enough, click here to visit and add it to your royal must reads. I promise you'll find yourself stopping by time and time again :)

To find out more about Selina Juul's amazing efforts with Stop Wasting Food click here for information on projects underway. To read Heaven's exclusive interview with Ms Juul click here. And to view extensive posts on Marie's involvement with the organisation and the cookbook visit the blog.
at 20.7.20
Share